Do Undocumented Immigrants Have Rights? 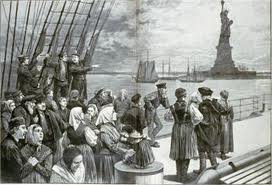 As I was following some of the discussions around the immigration reform here in the US, I had the opportunity to attend a Forum on Migration and Peace at the New York Law School last June 20 and 21.  The forum was sponsored by the Scalabrini International Migration Network, an organization that works to promote the dignity and the rights of immigrants. The event was attended by members of the NGO community, government officials, scholars and experts on the field of migration.

During the first panel, one of the presenters discussed the essence of migration and how in history people have always migrated from one place to the other.  He affirmed that you cannot look at  undocumented migrants simply as people who cross borders without the proper papers.  Most of the time they are people who are following the laws of human nature, seeking work to feed their families and to have dignified lives. In the past, our ancestors migrated in search of resources whereas now people migrate in search of opportunities to escape violence and poverty back home. The reality is that people are forced to migrate because economic opportunities are concentrated in few countries. As a result of the economic inequality among nations, people have no other choice but to migrate to nations that seem to offer opportunities of a better life.

During the forum, we were reminded to always keep in mind that immigrants are human beings and therefore have rights that must be respected. That being said, there is an urgent need for the implementation of humanitarian law principles when making migration policies.

We cannot continue to ignore the sexual abuse, violence, labor exploitation and discrimination perpetrated against undocumented migrants. Frequently, these result from a general lack of respect for them and insufficient government support in the receiving countries. Knowing all that, what makes immigration reform so difficult in this country? Some of the main reasons mentioned during the forum were political beliefs, national security issues and discrimination towards immigrants. However,   contrary to what many people think, the argument of preserving national security has no empirical base once it is known that only 9 % of people prosecuted in the criminal justice system are migrants. That also disqualifies the argument that migrants should be seen as a danger or a threat to the country. The fact is that migration can create great opportunities and enhance economic development.

We need to see migration through humanitarian lens. What we may be missing here is building empathy towards migrants and recognizing the great benefits they have brought and can continue to bring to the country. It is well known that governments have benefited greatly from migration but the favor has hardly ever been reciprocal. It is past time to change this reality.

It was noted in the opening panel that it is difficult to stop discrimination and abuse when there is a lack of data on migrants.  We need to know when immigrants’ rights are not being respected.  In all the panels it was agreed that to change the current situation, there needs to be cooperation and high-level dialogue among nations and civil organizations.

Network for Peace through Dialogue (formerly the Center of International Learning) was begun in 1985 by sociologists, theologians, and educators from Germany, the Philippines and the United States united by their world view and wanting to participate in transformative change. The Center was to provide ongoing learning, analysis and collaboration between people of the Northern and Southern hemispheres. There were two specific goals: to promote democratic processes and to work toward de-militarization. Thus since 1985 The Network for Peace through Dialogue has been dedicated to connecting grassroots communities, both local and global in order to identify and research common issues and solutions in the areas of making peace and promoting just action. Our objective is to provide a platform so that communities and societies can expand understanding and discuss their differences within a dynamic environment to help resolve conflicts and cooperate more fully. In all our programs we do so by analyzing, facilitating, and fostering dialogue, identifying solutions and sharing information.
View all posts by networkforpeace →
This entry was posted in Community/Environment, Dialogue, Immigration, Racism and tagged Community Engagment, Dialogue, Immigration, Racism. Bookmark the permalink.

1 Response to Do Undocumented Immigrants Have Rights?